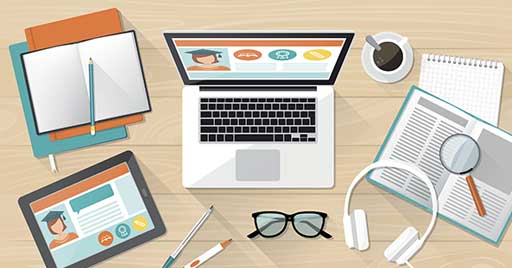 DynDevice LMS (learning management system) is updated with version 4.2 available on cloud by Mega Italia Media S.p.A. The update is rich and covers all 6 solutions that compose the system: we therefore strongly recommend the reading of this news.

company intranet management, has been released.

The following release note lists and explains all the latest changes grouped by solution.

"One to one" link. Added the possibility to link users of the reserved area of ​​the website or of the e-Learning platform (LMS) to users of the control panel. In this way, a learner (or examiner, or teacher) can, based on his rights, open the administration console (DynDevice control panel) through a click of a special link, directly from the interface / scenario of use of the courses. And to impersonate the administrator of the console for which the tie 1 to 1 had previously been foreseen.

Improvements to "bread crumbs" and mini guide. The bar of the "breadcrumbs" displayed in each window is now more readable thanks to a font of higher dimensions and a greater contrast of the same. Even the mini guide has been improved in terms of readability. Furthermore, a new "button" has been added, represented by an arrow pointing to the left, i.e. [Back]. By clicking on it, it is possible to return to the screen shown just previously in case of system operation in "mono-window" mode (with the "Open masks" option set to "Same window").

Background and tooltip for columns and buttons. The background of the learning management system has been modified, and the choice fell on an abstract background mainly in blue, typified by the hexagons typical of DynDevice solutions and by the logo of the same LMS. The reference to the release season of the version of the system in use remains, but to a much lesser extent than in the past (seasonal backgrounds will still be loaded, and selectable in the "System Options").
List headers and buttons have therefore been equipped with a tooltip to make them easier to understand (especially for partially hidden column headers, or for buttons with only the icon and without a label).

FunStore ™ for DynDevice expansion. The system has been equipped with an internal store useful to expand the limits (e.g. of learner creatable) and functionalities, according to what is currently available. Autonomously from the administrator, without the need to contact his own commercial or trusted dealer of Mega Italia Media S.p.A.

Dashboards and online users. Improve the information shown in the "Dashboard" when opening the console (control panel). In addition to showing the number of online users, it is now also possible to view the list of which learners are currently connected and during a course.

WYSIWYG editor. Updated the "visual editor" component shown in the various forms of the DynDevice control panel: the HTML code thus built will be more modern, lighter, and more compatible with new browsers.

Support for the provision of courses via LTI. Completion of the integration of the LTI protocol (Learning Tools Interoperability) into DynDevice: after the possibility of integrating external content in its courses a few months ago, it has now been added the possibility of delivering the courses uploaded on its own e-Learning platform outside, through LTI. That is, delivering your courses directly "inside" other e-Learning platforms and / or other software that support the LTI protocol.
The possibilities offered by this feature are many: in fact, a completely new sales channel of its courses opens to date impossible to reach. It is in fact the channel of learners and companies already equipped with an e-Learning platform other than DynDevice, which may however require ready-made e-Learning content. Without the need to release the SCORM ™ or xAPI package!

Improvements to the Android and iOS apps. Numerous improvements have been made to the "DynDevice OnP" app and, in cascade, to all the custom apps for customers:
• added multilingual support. When the app opens, the login form will be shown with the system language;
• added the "Recover password" and "Recover username" features in case of forgotten data by the user;
• activated the "push notifications" function concerning the expiry of the courses and their completion;
• in the "playing" scenario of a learning object, eliminating the display of the double burger menu, leaving only that of the "LCMS Scorm Player" module (the app will reappear on exit).

The "Cost Control" feature. Added the new functionality useful to maintain an account of the costs of its own training, both e-Learning and above all blended. With the possibility of tracking the costs of offices, classrooms, teachers, etc. With report display and export, including analytical reports.

Self-enrollment in expiring courses. Added a new option in the "Platform options" form with which it is possible to establish that the DynDevice learning management system auto-enrolls users in the appropriate e-Learning courses to comply with expiring courses, selecting the best course among the "Si" courses update with "of the course itself.

Improvements to the "DynDevice OffP" app (offline use). The "Align fruition" functionality has been decidedly improved in terms of execution speed, and in the same it has been solved a problem that did not allow the alignment in case of online use already started for a LO enjoyed then offline. Improved some app texts to increase usability.

Skills self-assessment. The new "HRMS Skill Exposer" module has been added. This module allows users to enter a self-assessment of the skills assigned to them once they have accessed the e-Learning / reserved area website. Self-assessments are also visible in the DynDevice control panel (but not editable) in the skill score form for the user.

Skill with weight. A parameter field was added to the skill called "Weight", which is a percentage to be attributed to the skill level.
This parameter will be used in the new scenario of the HRMS report "Skills Score" where it will be possible to select the user groups of interest and the skills to be calculated. The report will show the percentage score, or the weighted average, of the skills selected for each user in the group.

New algorithm for report generation. The algorithm that builds the HRMS report "Mandatory courses not completed or expired" has been rewritten to correct some minor bugs encountered and significantly increase the generation speed.

Concatenated tasks. In the "New / change job" form it is now possible to select the tasks that will be "covered" by the job being created or modified. This means that the compulsory courses of a "covered" task will be considered fulfilled at the time of the association with the respective compulsory courses of the task being created / modified. Until the time of the possible dissociation, when instead the expiry dates of the courses of the originally covered job will be recalculated maintaining the most advantageous dates possible for the user.

Template editor and template templates. The template import and export functionality, now also considers the templates of the modules: all the relevant information will in fact be included in the * .tpl package generated when a template is exported. And imported into the next import operation.

Type of fields "rich-textearea". Support for "multi-language" has been added for "rich-textarea" type fields (text area with line number and hightlight display of HTML and PHP code).

"Subscription" module. Revised the module in terms of usability. The order confirmation page has been improved which could confuse users when purchasing or renewing the subscription "them or other users", adding further checks.
In the console, therefore, a minor problem has been fixed in the "List of subscription associations" mask: now if the username is entered, the mask returns the results based on the word searched.

"Newsletter" form. The system for tracking and saving statistics has been significantly optimized and made fast. The click of the links received with a newsletter is now much faster, as DynDevice takes the time to track it.

Module "Magazine". Improved the speed of execution of the article selection query of an "and daughters" category.

"GDPR Cookie" form. Fixed the problem that appeared in the "View management" screen, where the pages where the form was inserted were exposed two or more times.
Therefore, the speed of execution of the code executed when saving the associations of the modules on a page to establish the inheritance of the visualization is increased.

"Assistance" form. Perform several general improvements to the module, including:
• it is now possible to change operator, category and close a ticket from within the ticket itself;
• when a manager is assigned to a ticket, the filter that was eventually affixed to the tickets displayed is now maintained;
• added to the tickets a new specific field "Platform / site", which is populated with the platform / site from which the opening of the assistance page is invoked;
• the new field mentioned above is displayed to the operators in the "List of tickets" and "Ticket details" scenario.

"Courses" form. In addition to redirecting a course that can no longer be sold to the next salable version, if the latter does not exist now try to do it also in the "consequential course".

"E-Commerce" form. Improved in several respects and in different scenarios. Here are the main improvements:
• in the scenario of filling in the entry forms, each text value entered in the fields is now automatically cleaned up of "invisible" spaces and characters placed at the beginning or end of the value entered (and above all, copy & pasted);
• for courses that do not include "Referrals for examiners" and the loading of additional documents such as "Declaration of responsibility", added the possibility of importing from a CSV file the registration forms (,) after downloading the "empty template") ;
• the values ​​present in the above CSV are subjected to the same controls that the form performs in the case of manual entry;
• the value entered in the registration forms for the e-Mail fields is subject to validity analysis.

"Progress" form. Several improvements applied to the module for "company discussions" which has been improved in terms of performance (speed of loading and posting of new messages) and in terms of usability.