DO YOU NEED HELP?

DynDevice is the solution you are looking for!
The complete training management system.

Ask for a free quote and demo of our e-Learning platform.

21/02/2011 - The certification process for SCORM™ 2004 3rd Edition has been completed succesfully: after months of procedures, Mega Italia Media has achieved this important seal of approval. 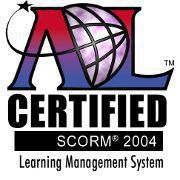 DynDevice LCMS is the most recent Italian software (Mega Italia Media S.r.l. is the second of only two producers) to be awarded a certification of full compatibility with the SCORM™ 2004 3rd Edition format, as a guarantee of the interoperability, sustainability and present and future compatibility of e-learning contents created and used on our platform.

The certification process was completed in January and February 2011 by the Wisconsin Testing Organization located at Academic ADL™ Co-Lab. It represents a step of fundamental importance in terms of the ability to develop software which is truly and fully compatible with the SCORM™ 3rd Edition format.
Specifically, this certification means that:
As mentioned before, while there are a large number of pieces of software which are marketed as fully SCORM™-compatible, only two manufacturers (including Mega Italia Media) are officially certified for compatiblity with the SCORM™ 2004 3rd Edition format. Indeed, a lot of LMS manufacturers who claim SCORM™ compatibility are only partially or entirely not compatible with it.
To view the official list of SCORM™-compatible products, click here.
SCORM and the SCORM logo are certification marks of Concurrent Technologies Corporation of Johnstown, Pennsylvania.
The SCORM 2004 Compliant logo indicates that DynDevice LCMS has been independently tested and certified by an ADL-designated certification organization to comply with SCORM 2004.
Successful test results for a product constitute AS IS compliance with SCORM 2004 using the designated tests.
Compliance evaluation using SCORM 2004 tests developed by ADL or others does not constitute or imply endorsement or assurance by ADL or others of product utility, quality, or reliability in use or technical accuracy of content.

20/07/2018 - DynDevice mid-July update
Version 3.2.001 introduces several innovations to improve all DynDevice solutions.07/07/2018 - DynDevice Summer Update
Summer is here and so is the new 3.2.000 update for DynDevice TMS28/06/2018 - Update 3.1.002 now available
DynDevice keeps developing17/06/2018 - DynDevice 3.1.001 now being released
Update 3.1.001 contains several important enhancements for all of DynDevice's solutions.24/05/2018 - GDPR-related changes, and more...
DynDevice release 3.1, which includes updates related to the GDPR (and more), now fully distributed on the Mega Italia Media cloud.14/05/2018 - Update 3.0.002 has now been released
The release of version 3.0.002 of DynDevice has been completed and it includes updates for the SCORM editor and other areas of the system23/04/2018 - Smartphone or desktop, same DynDevice 3.0
New single graphic layout for smartphone, tablet and desktop plus much more in this new major DynDevice release.04/03/2018 - New DynDevice release 2.3.002
A substantial new release involving all DynDevice solutions11/02/2018 - Latest DynDevice update with release 2.3.001
All solutions are affected by the enhancement introduced with the latest update of the SCORM™ editor and the e-Learning platform DynDevice.18/01/2018 - Introducing major release 2.3 for DynDevice
The first release of 2018 focuses on additions to the interface and enhanced security [|«] [«] 1 2 3 4 5 [»] [»|]
Explanation news
In this section you can consult all technical and non-technical news releases on

DynDevice macro modules that have been issued over time.